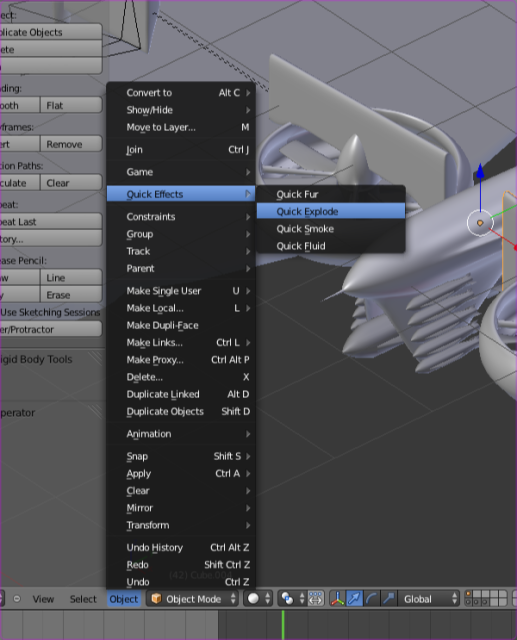 It works out of the box.. you may just need to set the start and end times to integrate with your animation. here i’ve also modified the brownian motion value, and gravity. tweaking more of the random features would have reduced the number of parallel moving particles.. and made it more realistic .
I also left the propeller pods intact and just manually animated them spiralling away from the exploding mass. One can then make them explode separately at will

the aircraft is my own quick design.. here are some stills:

and here’s a variation on that aircraft

Am finally all caught up on George R R Martin’s A Song Of Ice And Fire. …HBO can no longer shock me with cliffhangers and random deaths anymore.

Had planned on reading it ever since i watched the first episode and learnt that the show leaves out a ton of stuff that happens in the book.

I also already had one of the issues of The Hedge Knight Graphic Novel.

The problem was the pricing.. even the paperbacks were so expensive. Then one day at a bookstore i saw people crowding around a pile of collector’s sets that had all 4 books.. so i was also tempted to buy it.

A quick and prudent bit of research on my phone and wikipedia, told me that there were 3 more books as yet unreleased.. so some of these fans lining up to buy the “collector’s edition” were basically in for a dreadful shock.

Eventually though i found it available as digital Kindle downloads(at a fraction of the price).. and when it went on sale in July i picked up the Kindle versions of the first 4 books.. got the 5th a few weeks back.. and just finished reading it earlier today.

And i did it all on my phone and tablet(kindle’s handy android app) 🙂 saving tons of cash in the process.

You can get it here.

Got the 5th book A Dance With Dragons
for INR 502.45
(price fluctuates, you may now get it for lower. but the print version is still expensive)

You can get it here.

Now waiting for The Winds Of Winter(tentatively planned for release in 2014.) & A Dream Of Spring to release.

So do i recommend reading the books?
YES!!
No offence to HBO or fans (who think the show is perfect), but i feel the creators of the show are more interested in shocking the viewer with graphic sex and violence than actually delivering enough of the actual story.. which is why its taken 3 seasons to get to the middle of the 3rd book! That said the series is pretty well made and i will keep watching. Its fun to see all the characters in the book come to life on screen.. especially with the stellar cast. And i’m a big fan of the vfx enhanced direwolves in the show

ok am generally a fan of creature vfx and cg work

however if you don’t like waiting 7-9 months between seasons that end in jaw dropping cliffhangers, just read the book. GRRM’s writing makes for swift reading.. and reading it in the kindle app(synced across multiple devices) was a joy.

Tips: on the small screen of the phone i found that scaling up the font to max made for easier and faster reading, with no strain on the eyes. Infact i then went to the tablet and made the font bigger there as well.

Have played a few zombie games.. this one is brilliant in terms of gameplay.

If your a fan of fruit ninja and other rapid swiping games, you can adapt those skills to a new gameplay.. here instead of slashing stuff, you have to avoid this severed zombie hand(all in gruesome 3d)! while you avoid the hand your racing against time.. so do pick up the glowy things.. they add time to the clock so you can keep playing.

The gameplay is actually quite easy to pickup and fun to play again and again.
The intro sequence needs some polish, but the game makes up for it in spades.

My honest scores for this game:

Note: i played it on my ageing Acer Iconia A500, it ran pretty smoothly.

Had picked up this set of russian doll(Matryoshka doll) knock offs from a trip to Channapatna a few years back.. 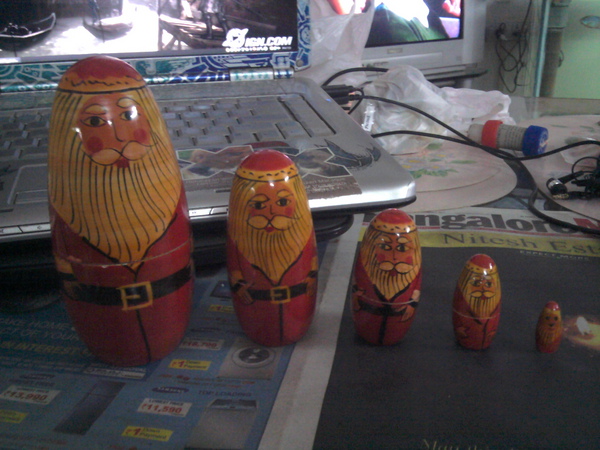 the quality was not so great.. and the enamel was a bit chipped

so anyway i recently saw a cool image on facebook.. someone had painted their set..
it seemed like a simple and fun thing to do.

so heres my version of it:

i used automotive paint for the basecoat.. drew the details with markers..
then my silver marker had run dry.. so had to leave the black ones plain. 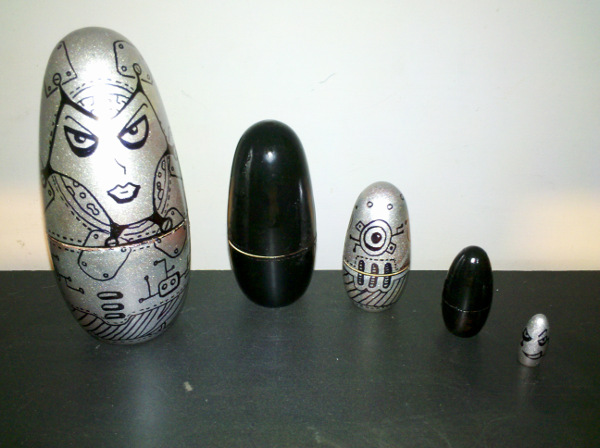 now need to drop into the nearest Channapatna handy-crafts place and pick up more of these cheap knock-offs to mod.